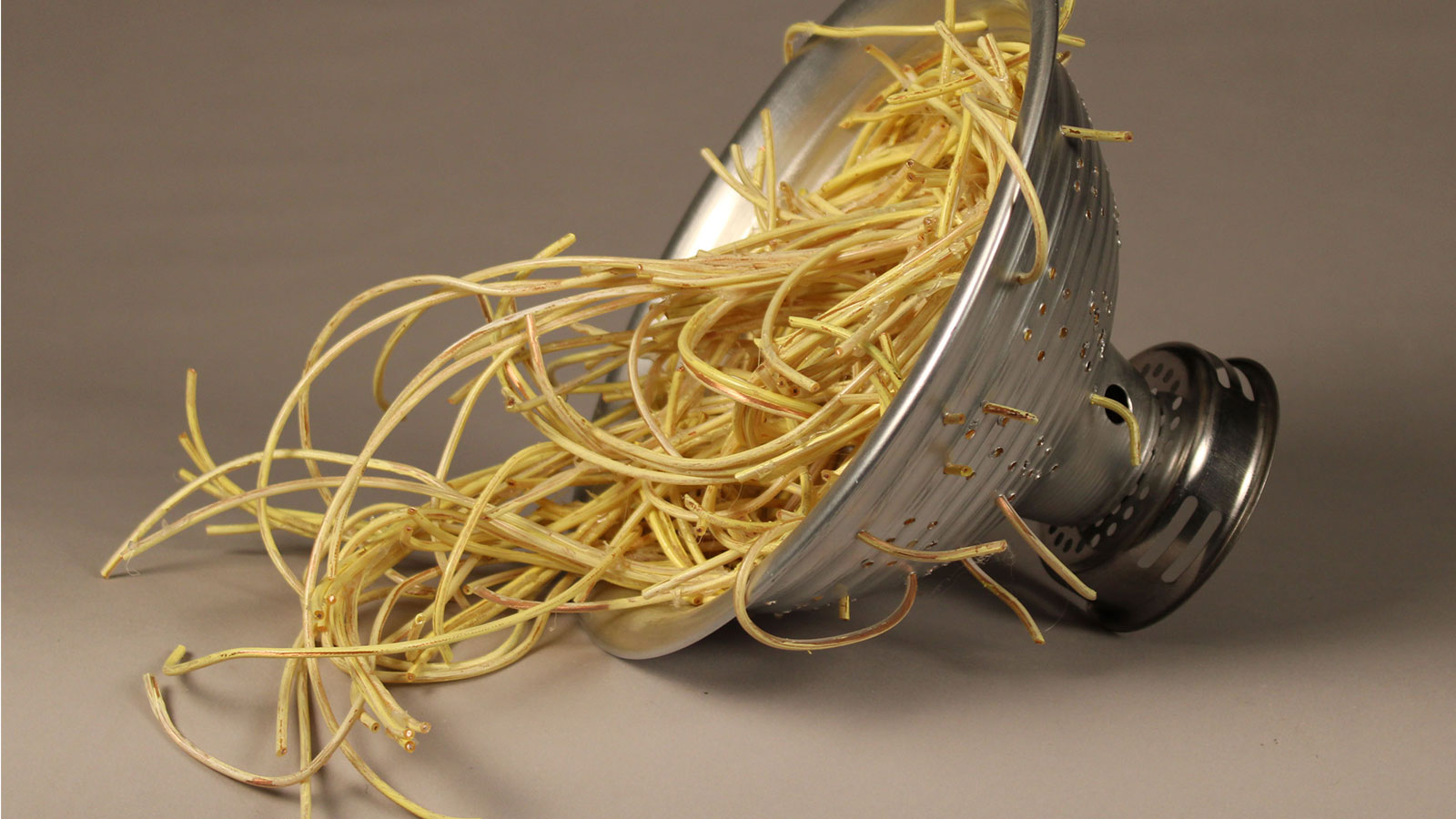 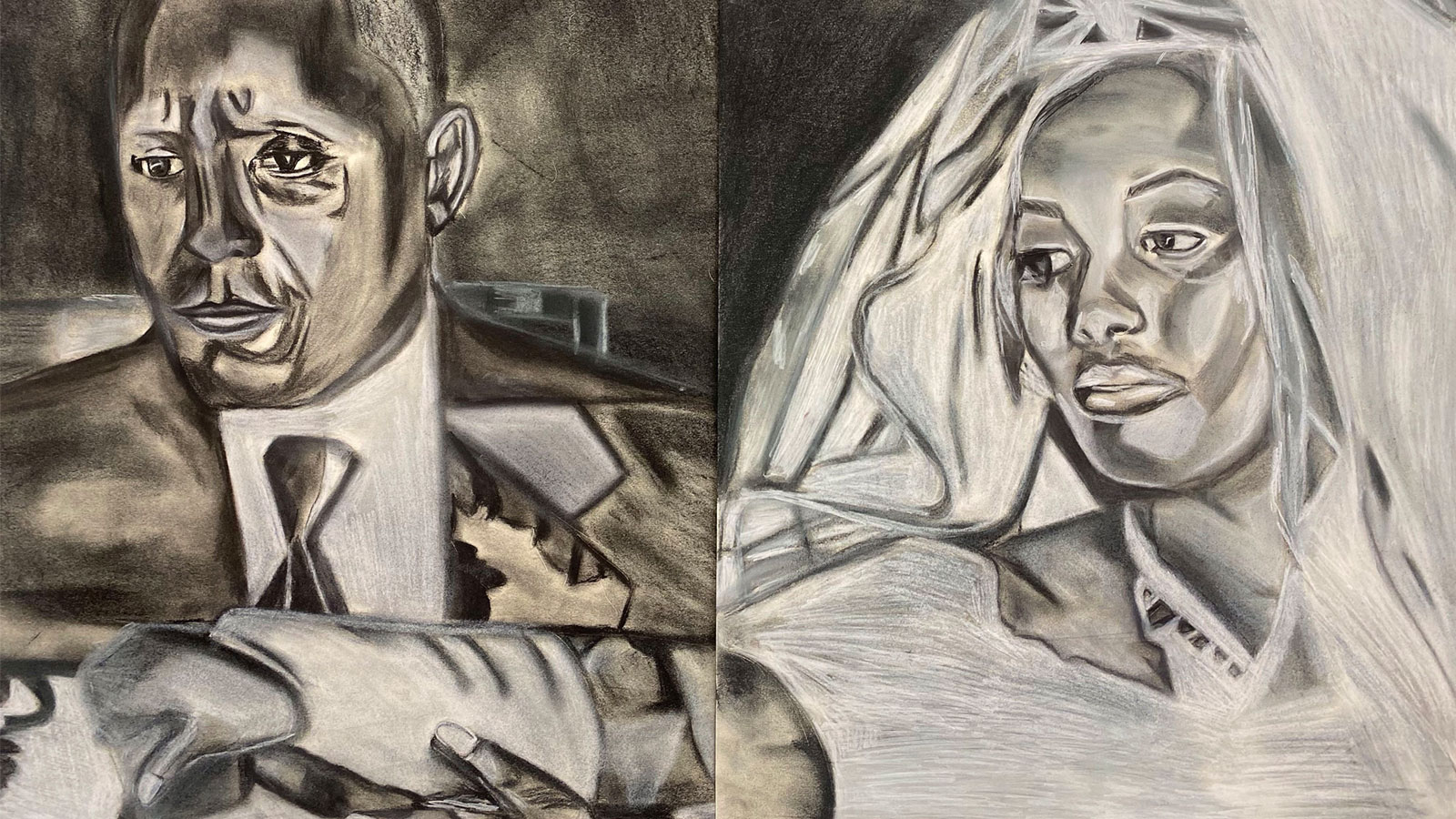 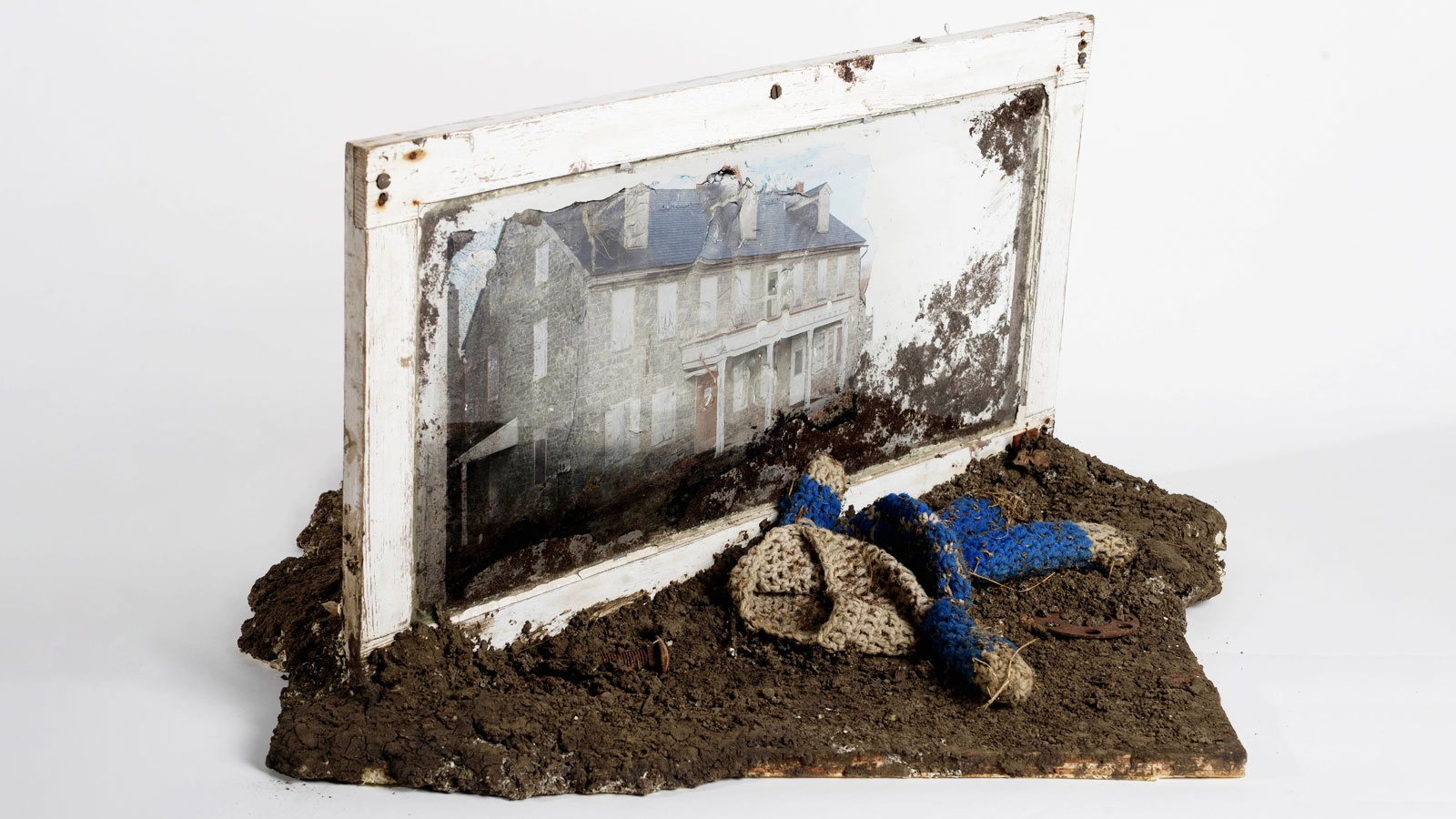 Build and develop your skills and ideas through the daily practice of making, research, discussion, and critique.

The study of fine art places no restrictions on self-expression but instead is characterized by an emphasis on wide-ranging intellectual curiosity, strong craft in the use of a variety of media, and a tireless push toward personal growth and solutions. Whatever the work, the fine art discipline requires the artist to be effective in communicating and leading others. Our rigorous Fine Art program focuses on the core studio areas of drawing, painting, printmaking, sculpture, and digital mixed media as stepping stones to find your personal artistic path.

During junior and senior years, you will work to develop a personal body of work and take two professional practices courses that prepare and expose you to professional opportunities within the creative field. The focus during senior year is on developing a sustained studio practice – as you work independently in your personal studio spaces. By the time you graduate, you’ll feel empowered to take ownership of your ideas and your creations as you share them with the world.

Why Fine Art at PCA&D?

All of our Fine Art faculty are working professionals who bring real-world experience as artists, jurors, and curators into the classroom, helping you to shape your creative path, seek out opportunities, and develop the practical skills needed to work within the business of fine art and within the creative industry.

With a student-to-teacher ratio of 9-to-1, you’ll get personal instruction that is rare at other colleges and universities. Continual evaluations and critiques, beginning in the sophomore year, assess and promote your technical skills, ideas, and concept development. From the day you enter classes, opportunities to exhibit your work within, and beyond our community, will be at your fingertips. And you’ll learn in the #1 best small city to live in the U.S., in a vibrant arts-rich environment with more than 125 galleries and creative spaces.

PCA&D students have the opportunity to explore multiple interests by incorporating a minor or certificate into your major. Expanding your skill sets to cross disciplines will make you more appealing to future employers and broaden your potential career path. 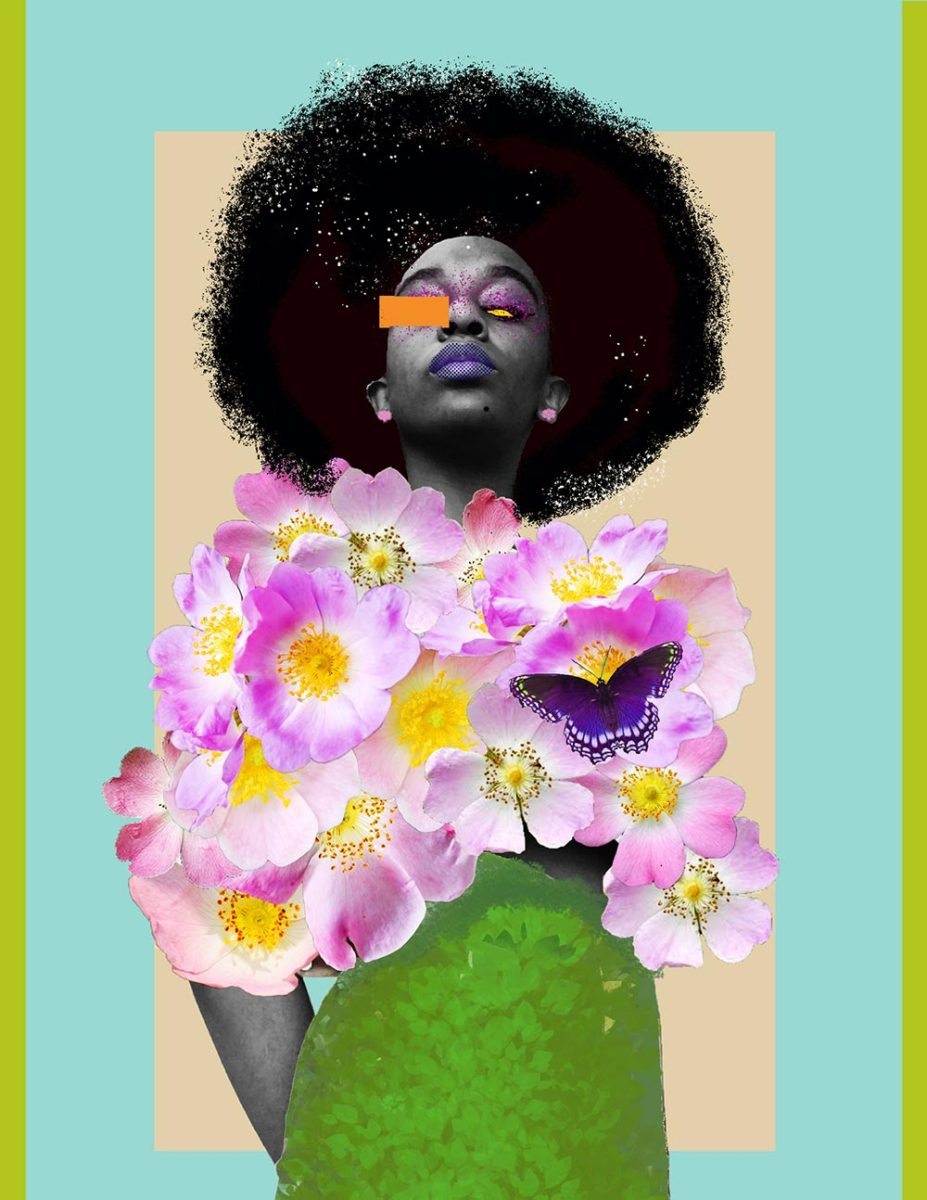 I came to PCA&D knowing how to look and left knowing how to see. Seeing is the ability to analyze and appreciate the intent, process, and emotion of people's communication. Between the lines of art is a climate piggybacking off of the struggle and success of civilizations and their journey through social issues, exchange of theologies, and disruptions in governments. I learned that without art, people would have one less way to communicate important issues in their society in order to use emotion to invoke change."

Guest speakers and visiting artists frequently visit both on campus and virtually so you can make connections, and receive feedback on your work from professionals who are working in the field. Speakers have included Amy Boone-McCreesh, Neil Callander, Heather Hart, Hollis Hammonds, Stephen Towns, Charles Burwell, and Magnolia Laurie.

PCA&D organizes or participates in myriad events that work to help students realize the relevance of their career choice in the real world. Here are some of the events you can attend as a PCA&D Fine Art major:

Art Markets provide a venue where you can display and sell your artwork or handmade goods to the community, giving you experience with the business side of the profession.

Field Trips to regional venues as well as to museums and studios in places like New York City (think MOMA and the Whitney Museum), Baltimore, and Philadelphia are a regular and important complement to the curriculum.

Step Into Your Career

In your senior year, you’ll develop a written thesis about your work and prepare an exhibit for a December show at the Lancaster Museum of Art. You will discuss your Senior Studio work and your thesis in a short Senior Artist Lecture in PCA&D’s atrium.

The Senior Show & Celebration is the culmination of your experience at PCA&D. It is held after Commencement in PCA&D’s Main Gallery and throughout the campus. All seniors participate in this exhibition which is open to family, friends, and the public.

After you graduate from PCA&D, you have the opportunity to apply as a Fine Art Alumni in Residence. You will be assigned and maintain a studio alongside the Fine Art seniors. In this role, you will be active on campus and participate in guest critiques. You will also exhibit the work completed during your residency in PCA&D’s main gallery.

Where could your creative life take you?

Fine Art students are encouraged to complete an internship the summer before their senior year. An internship will give you the opportunity to explore career possibilities in curation, education, art therapy, mural design, and community practice and more. Students have interned at the Phillips Museum and the Lancaster Creative Factory, among others. 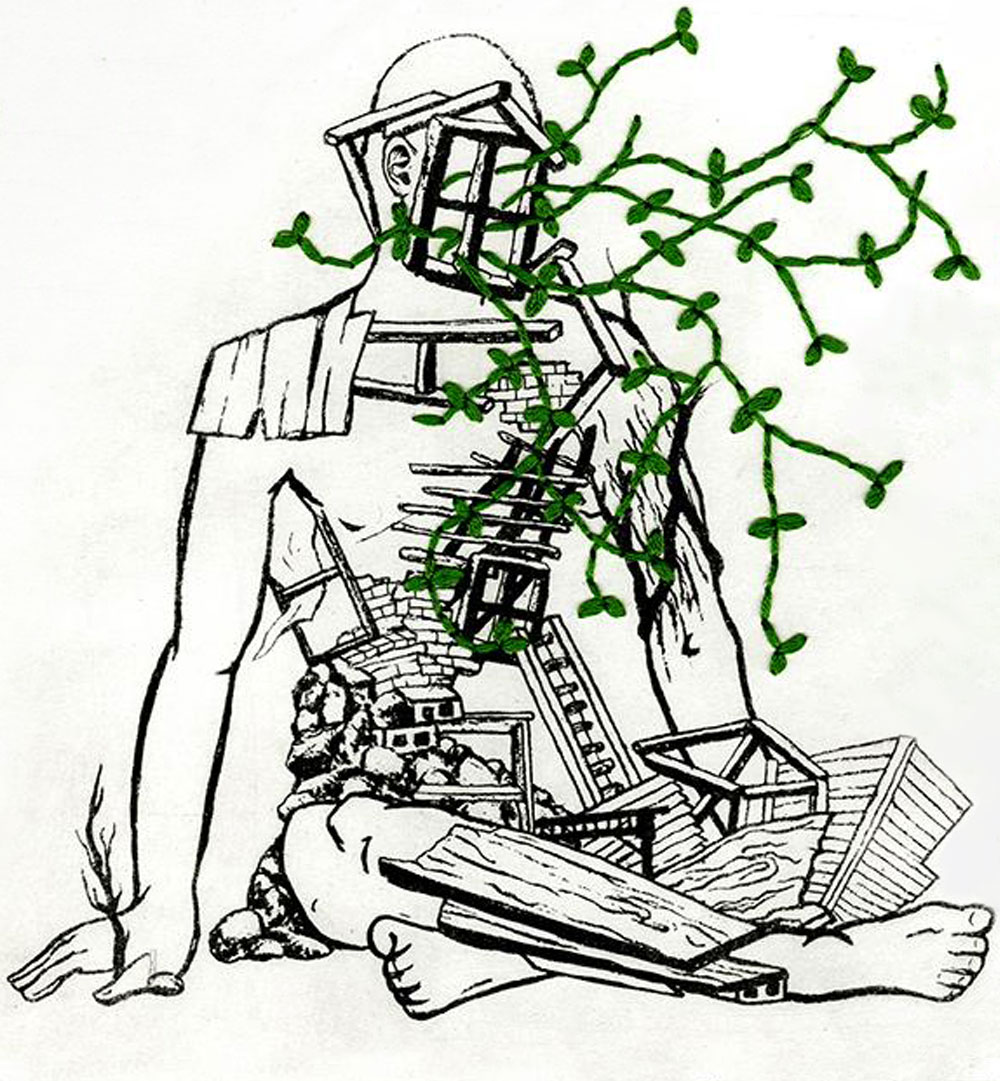 At PCA&D, we give you the tools, skills, and exposure you need to help your artistic vision mature. We will show you how to commit yourself to a process of personal development. You will learn to think independently, use materials and technology creatively, and stay motivated so that you can realize your dream to become a working artist. Fine Artists can find work as:

where are Alumni now?

PCA&D students find work in a wide variety of fields and with prestigious companies and organizations nationally and all over the world. Aubrey Maurer ’22 sculpts a future in an Emerging Artist Residency

For Aubrey Maurer, 3D design and sculpture with ceramics have been a natural fit with her artistic leanings.  “The handmade element, the 3D element of sculpture expands that flat 2D feel, and it just comes to me.”  The 2022 Fine Art BFA graduate has been selected for Millersville University’s Emerging

A faculty of working artists

As experienced working professionals with strong ties to resources and opportunities in the field, your faculty assign competitive, real-world projects to enhance your portfolio with professional work well before you graduate. Becky Blosser earned her MFA in Visual Arts from Mason Gross School of Art, Rutgers University in 2007. Through process and printmaking, Becky creates forms that consider supportive and opposing forces in relation to both built natural elements. Becky’s work is included in such collections as the Zuckerman Museum of Art in Kennesaw GA, and the Janet Turner Print Museum in Chico CA. Matt Allyn Chapman '08mattallynchapman.com
Read More
Matt works professionally in the realm of Geometric Abstraction. Using shape, color, and hard edges paired with organic gestures to create drawings and paintings that speak to observed happenings of life, as well as those happenings that are subtle and sometimes challenging to define. Though he loves drawing and sketching from life, and continues to hone those skills in his sketchbook, he really enjoys using acrylic paint, graphite, and inks. He has a BFA from Pennsylvania College of Art & Design and an MFA from the Pennsylvania Academy of the Fine Arts. 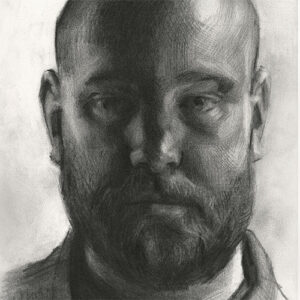 Evan Kitson '10evankitson.com
Read More
A draftsman, painter, instructor, anatomist, curator, collector, and all-around art-obsessed thirty-something, Evan Kitson splits his time between Lancaster, PA where he maintains a lively studio practice working with deceased subjects, and New York, NY where he exhibits and instructs. Kitson earned his BFA in Illustration from PCA&D, his MFA from the New York Academy of Art, and has taught in many institutions, including The Art Student’s League of New York, The New York Academy of Art, The Metropolitan Museum of Art, Harrisburg Area Community College, and Studio Incamminati. Aaron M. Thompsonaaronmichaelthompson.com
Read More
Aaron is a professional painter whose paintings and drawings have been exhibited in Samuel M. V. Hamilton Museum at The Pennsylvania Academy of the Fine Art. A native of Charleston, South Carolina, he earned his BFA in Illustration, from Savannah College of Art and Design. After being awarded The Merit Scholarship from the Pennsylvania Academy of the Fine Arts, he moved to Philadelphia where he earned the Masters Degree in Painting. 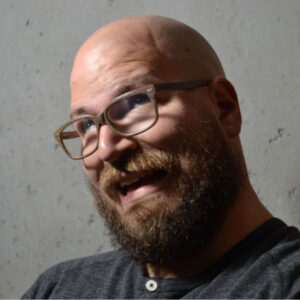 Randall Lear '11randalllear.com
Read More
Randall, a PCA&D graduate, is an artist living and working in East Berlin, PA. His work has been exhibited in the American University Museum at the Katzen Arts Center, Arlington Art Center, Artisphere in Arlington, VA, and Pulse Miami, among others. He is currently represented by Adah Rose Gallery in Kensington, MD. His work has been discussed in the Washington Post, Washington City Paper, and Bmore Art. He has been selected for several awards including Catharina Baart Biddle Art Award and The Sharon Wolpoff Works on Paper Award. 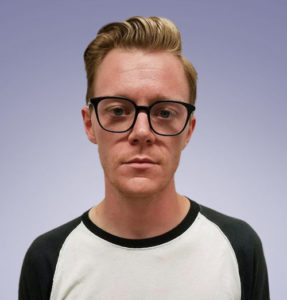 Henry Gepferhenrygepfer.com
Read More
Henry is an artist, educator, and curator from Lancaster, PA. He holds an MFA in printmaking from Edinboro University and an Art Education degree from Millersville University. In 2013 and 2020, he was a finalist in the Print Center’s Annual International Competition. Henry’s work has been shown nationally and they’ve been an artist in residence with Zygote Press in Cleveland, OH, Sparkbox Studio in Picton, Ontario, and The Wassaic Project in Wassaic, NY. Most recently, Henry curated a book titled Past Lives which was published by Risolve Studios in August of 2020. Caitlyn Bishopcaitlynmacdonald.com
Read More
Caitlyn received a BA from York College of Pennsylvania with a concentration in Sculpture and received her MFA in Sculpture from Edinboro University of Pennsylvania. Her work is driven by material and process and largely influenced by the natural world, more specifically fungi and slime molds. She works and resides in Lancaster, PA where she continues to create work and teach.

Make your creative life, a way of life

While you’re still deciding on a school, go ahead and start an application or submit your portfolio. You can also register for admissions-related events, or how about a personal campus tour.

Our admission counselors are your personal guides to discover if our creative college is right for you. Reach out, share your story, and have your questions answered.