When Alexandria “Lexi” Bonner wrapped up her final project for a PCA&D class on making a children’s book, she didn’t just shove the pages into a drawer and forget all about them.

No, those characters lingered in her mind: A mischievous firefly named Ember. A curly-haired, button-nosed child whose daytime curiosity spills over into a playful, creative dream world.

And Bonner, who’d long speculated about writing and illustrating a book, wasn’t about to let that firefly and that child linger forgotten in a drawer forever.

Three years after earning her BFA in Fine Art from PCA&D, Bonner’s tale about the pair’s dreamtime adventure has been published as “Ember,” a wordless book that tells its story solely through Bonner’s illustrations.

The final product, she says, “is really similar to (my) college project, refined through several rounds of storyboarding.” But that doesn’t mean the process has been straightforward, or without both artistic and business hurdles.

Starting with finding the right look and mood for Ember’s human friend. 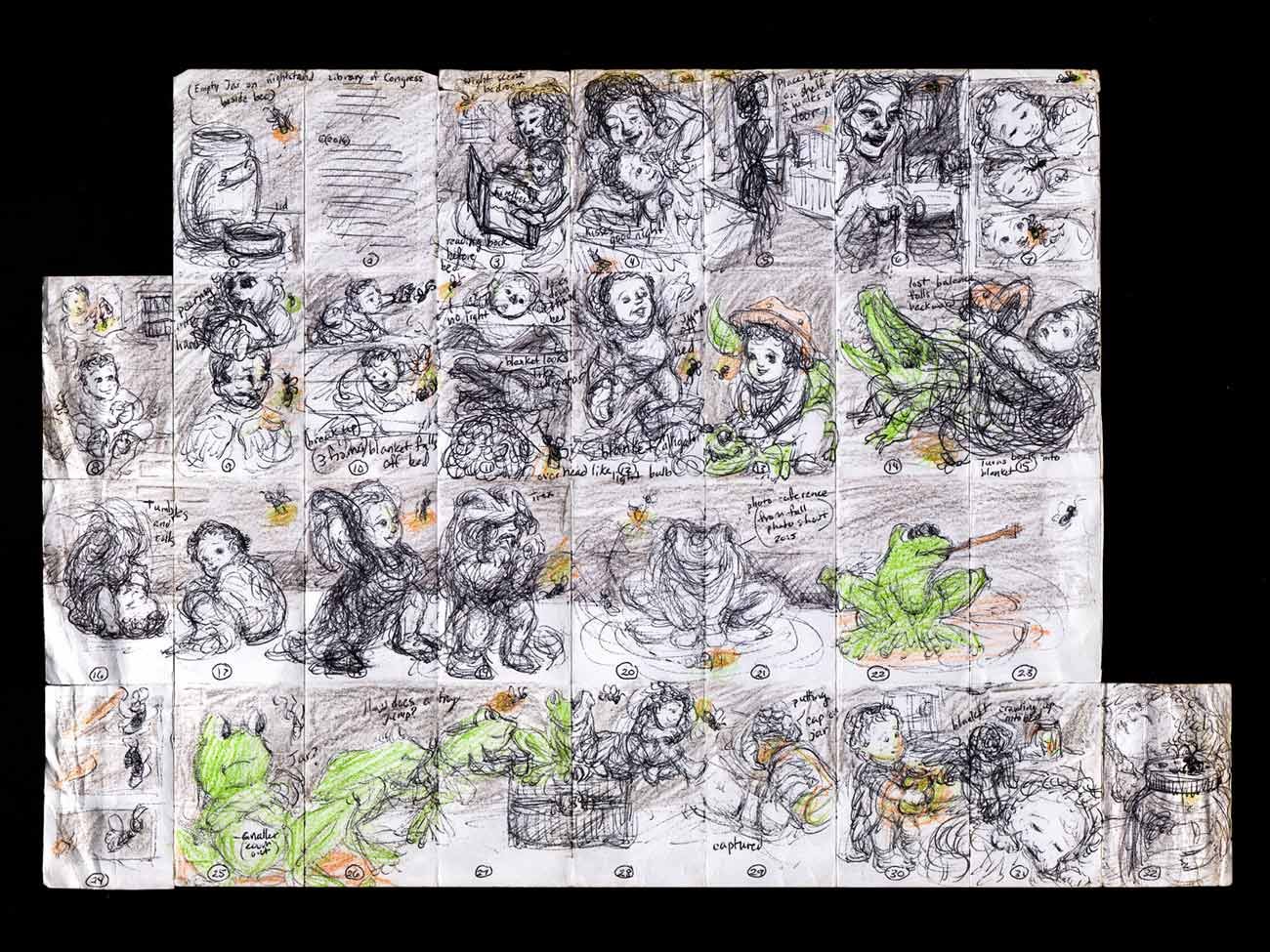 Early mapping out of the story that would become “Ember,” by Alexandria Bonner.

Catching ‘that joy of imaginative play’

Bonner laughs when she thinks back to her initial attempts at drawing something that can be spotted on every elementary school playground: a young child.

“My first drawings were like those ugly babies in Renaissance paintings!” she says — the ones with faces that look too old perched on top of tiny, child-sized bodies. “Trying to draw a kid was really challenging!” Inspired by the Disney characters she loved as a child, though, and Glen Keane illustrations of Tarzan as a baby, she kept at the character studies, slowly refining “Ember”‘s nameless child.

Using the storyboards and mockup she created for the class led by former PCA&D Illustration faculty member Joe Kulka, Bonner says, “I already had a feeling of what I wanted the book to be. 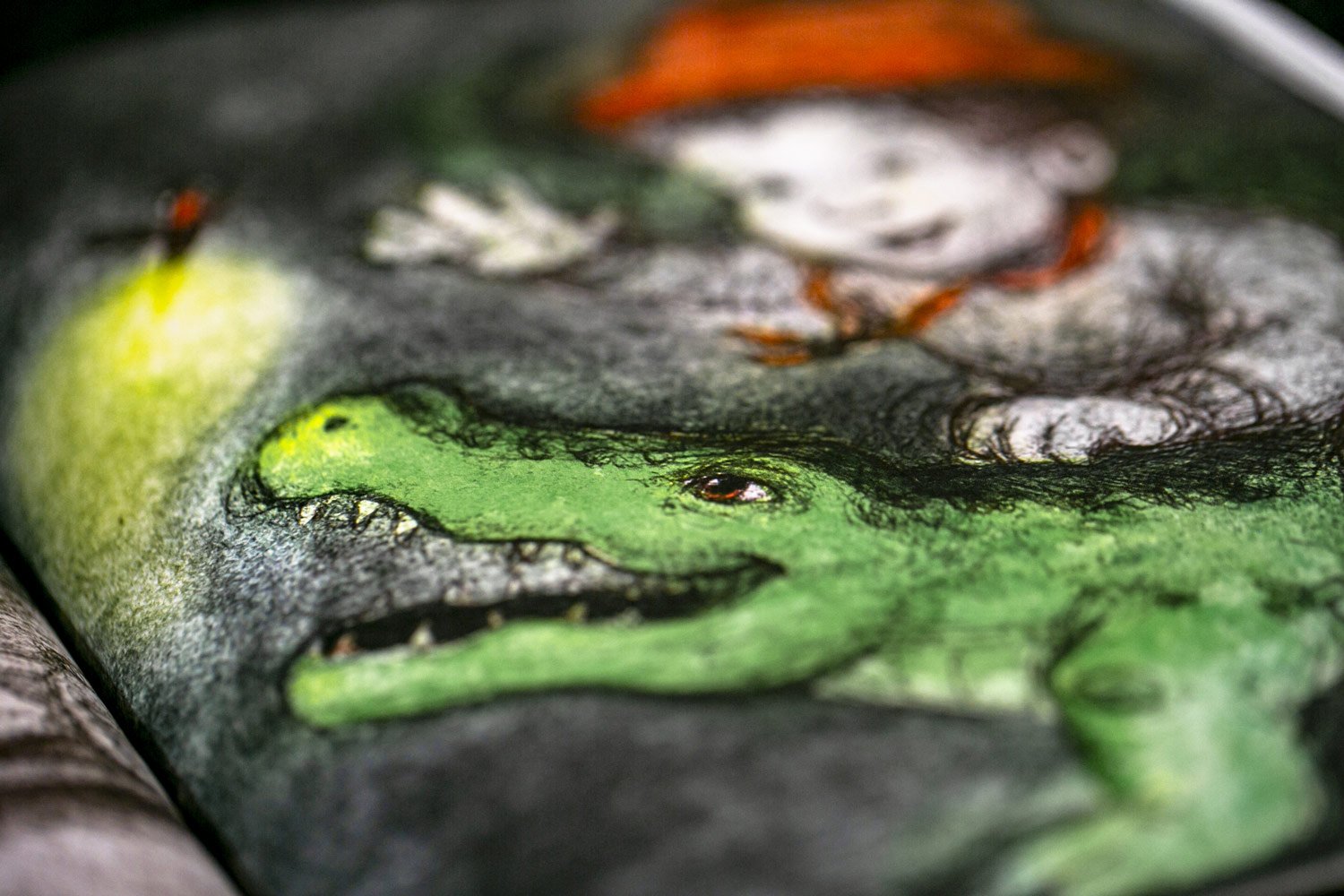 A detail of Ember’s adventure with a young child and an alligator figurine “come to life.”

“You know when you want to do something, you make sure to do it as good as you can?” Bonner says. “That’s what I’d done with the final project (for the class). It required me to really narrow down what I wanted to do — catch that joy of imaginative play and the feeling of being a kid.”

So a few years after graduating, with the dream still percolating in her mind, Bonner took out her old, carefully taped-together black-and-white storyboard illustrations, looked over the attached notes she’d written to herself about composition and ideas, and went to work. 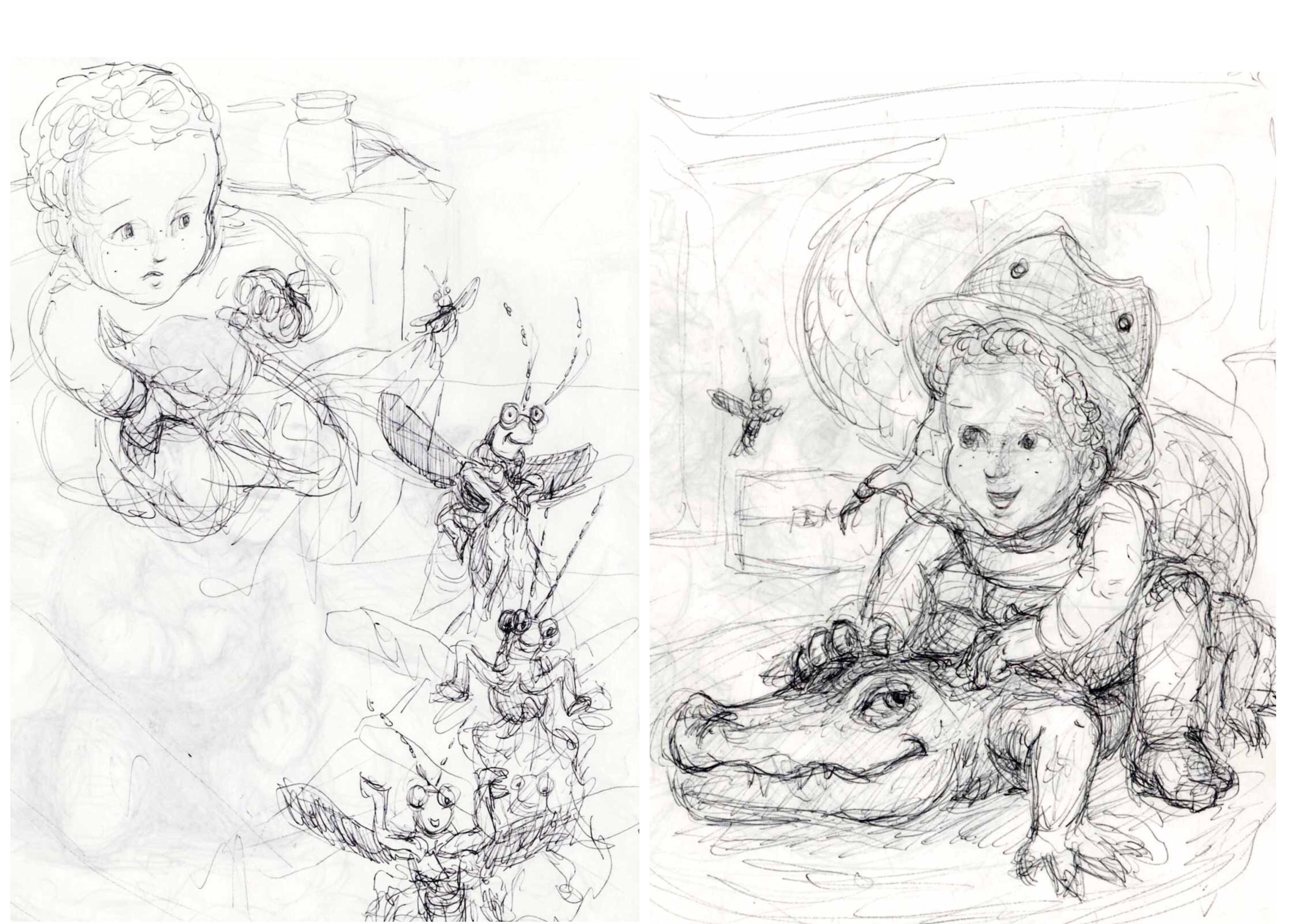 She set herself a schedule, organizing a work station/studio space in her bedroom office: One page a week, grayscale images for the “real world” and a slow introduction of color to hint at the imaginary dreamscape. Touches of acrylic white to accent. Shimmering watercolors for Ember’s firefly glow. All set down on watercolor paper that lets the texture shine through. And after all those initial stumbling blocks she refined the book’s child into a character by turns winsome, playful, impish, gleeful, and finally — finally! — tuckered out.

“Since I was so inspired by animated movies, it’s exciting to be a character designer,” Bonner says. “It’s the most exciting part of the (storytelling) process for me, to practice how they move, what their personality is.”

On the business end, and after some conversations with traditional publishing houses, she opted to publish via Blurb. The decision, she said, required less upfront investment from herself, allowed her greater control over the finished product, and guaranteed a quick turnaround.

And Bonner, who works for Nick Gould Photography in Lancaster, still has plenty of the book-illustration bug left.

She has two illustration projects tentatively lined up for storylines that others have written, and is eager to see what her experience with “Ember” will bring.

What: “Ember” Book Launch and Signing with Alexandria Bonner.

Where: Curio. Gallery & Creative Supply, 106 W. Chestnut St., Lancaster. You can buy your very own copy of “Ember” here.