Every Monday, on the Pennsylvania College of Art & Design blog, a different profile of an artist character sketch is posted. These are taken from a classroom project where the illustrations and fine art students create “Artist Trading Card,” first researching the facts about and the style of a selected artist, then making a trading card that captures the spirit of the artist. Three PCA&D sophomore illustration majors, Abigail Bonett, Ariana Pluchinsky and Ashley Obenstine, are taking us through their Art Card Projects in this blog series.

WHY I CHOSE THIS ARTIST:

I chose Francisco Goya because in my first year at PCA&D we had an art history class and I remembered his painting of Saturn devouring his child and how striking that was to me. I loved his dark and eerie depictions of war. I felt that his work as a whole gave me a lot to work with and be inspired from while creating the portrait.

I’m Ari Pluchinsky. I’m from Pittsburgh, PA. I went to City Charter High School and I am now a sophomore Illustration major. I had an addiction to and profound love of sequential art and hope to pursue that in the future.

At first I had quite a few of his paintings and etchings working into the character sketch but had to pair it down for clarity, since the cards are going to be printed small. Goya’s pose is reminiscent of his famous painting of Saturn devouring his son, though here the figure he is eating is that of the Spanish king at the time, which is commentary on Goya’s political views. The outfit he is dressed in is taken from his self portrait of him in a candle hat. Surrounding Goya are different images from his paintings. At the bottom right is a goat from his Black Paintings. Circling around are the nightmare owls and bats from his etchings The Sleep of Reason. To the right side, behind our artist is the figure of death taking from his Los Disparates etchings. 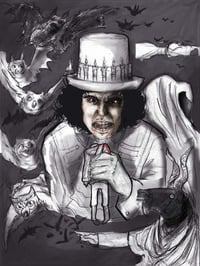 For my process I started off with pencil sketches. Then moved to a more complete line drawing. After scanning that into the computer, I started digital painting in photoshop. First I laid in the dark then began to paint in the tones. I guess this is what would be the underpainting or the washes if this were a traditional medium. Mostly it was me just slapping on color until I got my color scheme blocked out. My color palette was taken from a photo of a greasy pan I found at work. Thats where the bright yellows and oranges come from. That greasy pan was the background then painted on top of. Then I went into the painting and blocked out a smoother base for the face and so on. Then some final touches and fixes. One of the last adjustments was moving out his arm to give the composition more motion. Then it was done, after a lengthy fight with the printer to get the colors to print right.